I recently played a decent amount of Crayola Scoot. Immediately one thing was clear to me. This game was aimed at the younger generations. While there’s plenty of fun to be had for all ages, it was quickly evident that the most fun was to be had while playing with kids. So I let my little cousin Ayma play it. For quite some time. Instead of me reviewing the game I’ll be interviewing her to guide the conversation and see what she really thinks. As a disclaimer: I hate kids. I really do (although I’m a teacher so no one point out the irony). As the game is clearly aimed at a certain demographic, I feel it’s only fair that the same demographic reviews it. I’ll be in bold, Ayma in italics.

It’s sooooooo fun. You get to color in a whole arena with paint while on a scooter. You can jump around or go fast or do tricks and kinda anything really to spread the paint. There are lots of different things to do like all the ones (modes) we tried and there’s even like special characters that you can get like a weird crocodile dude and a zombie thing!

I liked getting to make my lady! She looks really cool and getting to choose her clothes is fun! You can change clothes as well which I like because it means you never get bored of seeing the same thing. The famous skaters are the coolest though. I love making my person’s hair change whenever I wanted!

Was it ever hard?

The S.C.O.O.T games were hard. They are like these special events where you have to fight the most famous skaters and if you win you get more famous (Boss battles). It was good to get help to do those fights! You have to beat their score and if you beat them five times you win and they lose! Then you can buy more clothes!

What was your favorite way to play?

Tig! (Tag I think down south/in the States). You have to either try to catch all the other skaters or you have to run away and hide! You leave loads of paint behind you though so anyone could chase after you! You can even do dabs when you escape people. The mode where you just color everything in is so much fun too. You can just skate around painting everything your color and jump and go up ramps around people.

How did it feel to play it?

Hard when I started because I was just pressing every button! But after that, I learned how to do spins and then I could shoot paint all over! When I learned how to jump up and spin whenever I wanted that was when the game got to it’s funnest. You can even turn fountains on to shoot everywhere. It tells you how many points (percentage covered) after some levels and it’s fun to see how many places you got paint even if you lose!

Does it look pretty?

My girl does! All the paint is really great and it all looks so shiny and colorful just like real paint! It doesn’t just go everywhere in a rubbish way, it comes out in blobs and even splats when it lands on the ground. Sometimes it’s just fun to go in a circle and watch the blobs explode on the ground (it’s really not).

Is the music good?

YES! It’s like bouncy as if you’re watching the exciting bit on a tv programme. So like there’s all this stuff happening and the music knows and it’s getting louder but like making different noises as well.

Does it make you want to go on a scooter in real life?

It looks really cool and like loads of fun so maybe. I don’t know if I’m allowed though. I don’t think I’d be allowed to throw paint everywhere (you definitely wouldn’t). It really makes me want to use crayons and color in a lot though. I don’t think I could do all the tricks so I like that the game lets me do something I’d be too scared to try. Some of the jumps are really high! 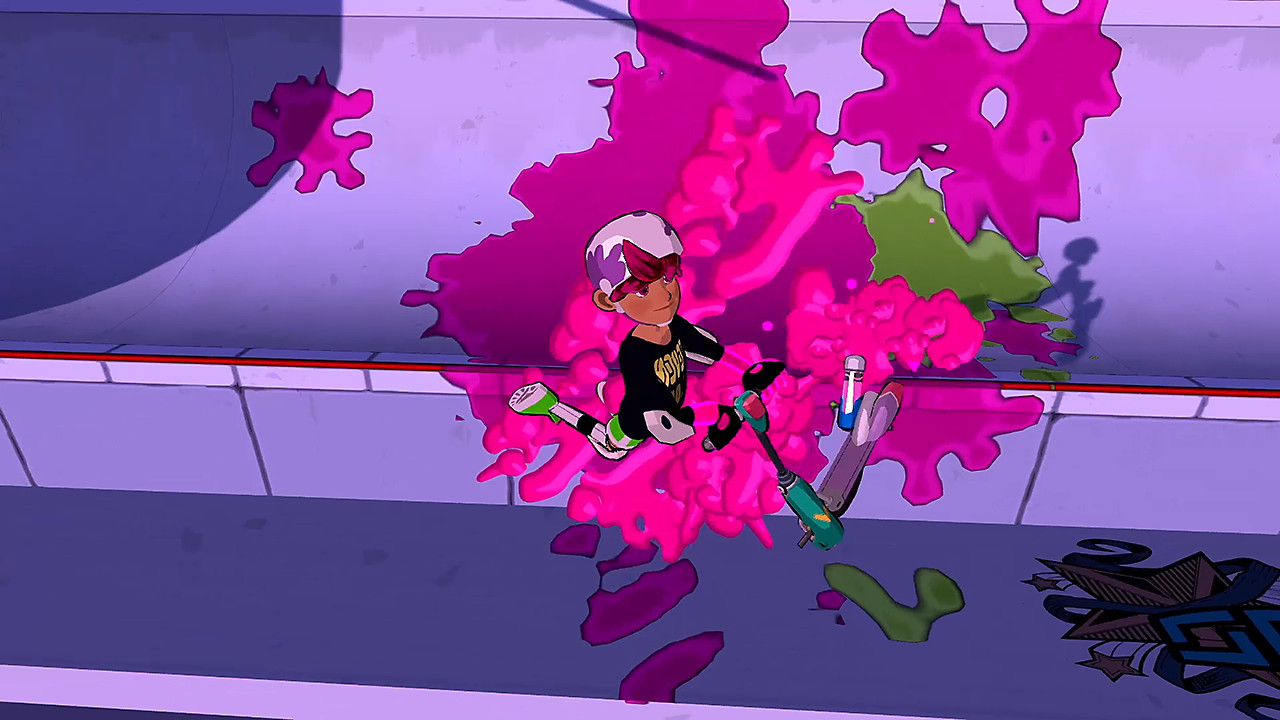 Do you want to play more?

I saw a robot thing on the chart that shows the famous people. I really want to get him! I also liked when we played multiplayer because I got to beat you! (Obviously, I let her). I want to see all the different places and different outfits.

Would it be a good Christmas present?

YES! (She went on a bit here but it was mostly a repetition of the words color, paint, fun and cool and I stopped listening).

If you aren’t sure Crayola Scoot is essentially Tony Hawk combined with Splatoon. I played some solo as well as helping Ayma out and it is fun. There’s a level of challenge to it that I wasn’t expecting. I let Ayma played on one star (there are three-star levels for each level) and she was able to win after a couple of tries. I tried it on three though and I massively struggled. I just lied and said one star was the highest. There’s plenty of gameplay here and it is genuinely good fun.

Crayola Scoot is available on PS4, Nintendo Switch and Xbox One!

A Deep Analysis of Hitman 2 Locations

You read the review, now it's time to take a...

In this review, we check out another potential indie darling...

Another Tuesday is here bringing with it yet another Deals...