Middle-Earth: Shadow of Mordor is an open world action-adventure game based on J.R.R Tolkien’s novels The Hobbit and Lord of the Rings, as well as Peter Jackson’s film adaptations. Developed by Monolith and published by Warner Bros. Interactive Entertainment, officially announced in November 2013, it was released for PlayStation 4, Microsoft Windows, and Xbox One in September 2014 and  for Xbox 360 and PlayStation 3 in November 2014, it is definitely a must play game for Hobbit and LOTR fans.

Reviewed on Xbox One; also available on Playstation 4 and PC.

The player will take control of Talion, a ranger whose family and himself are murdered by Sauron’s hordes; at the moment of his death, a secondary main character will make his appearance as Celebrimbor, an elf of the time when the ring of power was created; in the form of a spirit he will join Talion in a frenetic hunt of Sauron’s main generals. This fusion of two characters in one, opens a wide range of possibilities to the player making him/her able to use a fascinating variety of movements, combos and executions, including stealth mode executions which change depending on the situation.

In addition to that, there are three main weapons you will be using: a sword, a bow and a dagger. You can update them with runes and some of the abilities gained by the hero will affect them too. The hero abilities are divided into two main branches, one will affect your physical abilities and the other your spiritual abilities.

The combat system and they way the player can move through the scenario is clearly based on Assassin’s Creed and Batman Arkham games, although the lack of originality, this system fits perfectly with the aim of this master piece. 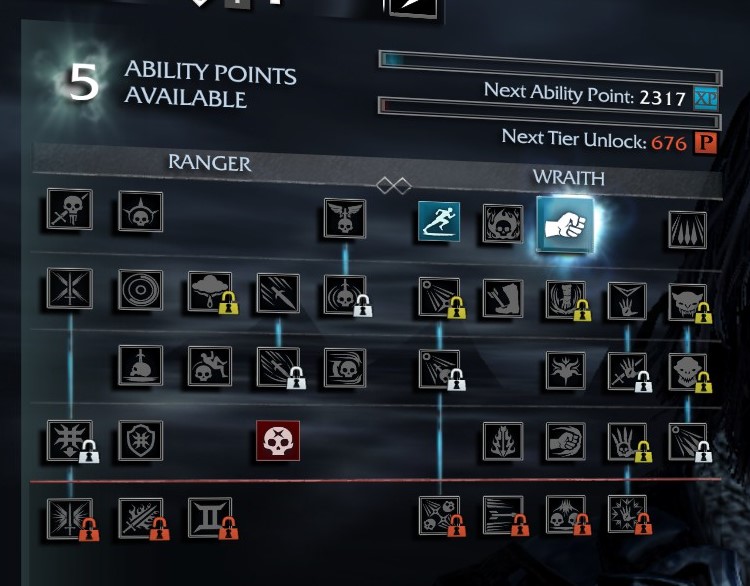 The way the game is focused makes it very dynamic, being always something to explore or to find, and revealing hints about how the life was like before Sauron arrived.  The player will face 20 story based missions and many more secondary; as the game is also based on a RPG system, the main character will evolve during the play time; gaining experience by accomplishing each mission will provide new upgrades either for Talion’s abilities or Celebrimbor’s, this is up to the player’s preference.

It’s also worth mentioning the addition of the Nemesis system, in which the enemies will be promoted each time the player gets killed, making them stronger and replacing the positions of the major ranked orcs that have been killed.

This game is not just about killing orcs, you will have to set free the slaves under their control to gain vital information to complete the game (like the weakness of a certain boss you have to kill). Make the enemies fight for you by possessing them! Or get information by torturing their minds. Hunt the fauna, search the healing plants, dominate Caragors with your power, ride them through the middle earth frightening your enemies and find the objects which will reveal the true story of Mordor.

Shadow Of Mordor has no multiplayer modes; however, you can choose other secondary game modes like: Lord of the Hunt, The Bright Lord, Trials of War and the Nemesis Forge.

Search, seek and destroy your enemies from the shadows until you get revenge!

As expected, it includes an epic sound engineering and photography, with motivating soundtracks that matches the LOTR world and combat situations, the fidelity in which the developers recreated Mordor and the history beyond the Black Gate is very accurate and will make the player dive deep into the game. The slow motion cameras when performing an execution, the blood, the lighting and shade effects, the sparkling and sound of the swords clashing in combat, the explosions and the rich fauna details among many other living dark species which you will find during the game are outstanding, giving the experience a more realistic point of view.

The detailing of the game is impressive and not only that, the player will be able to interact with many objects found at the scenario in many different ways as he/she advances through the game.

In conclusion, Shadow of Mordor is the best LOTR game i have played in a long time, it reaches the expectations and although some are very critic on the similarity with assassins creed system,  I have to say I really enjoyed playing this epic game full of emotion, adrenaline and a soundtrack that will blow up your mind.

The challenge of completing the campaing 100% will make you spend hours of fun, as the secondary missions are very attractive and challenging but keeping a balance that makes them achievable for any player investing a moderate quantity of time, it is not just a game that incudes high definition graphics and sound quality, but much more than that.

Apparently, (discovered by twitter user @GamerTagstic) if you visit Gamestop,...

WE ARE DOOMED Review

WE ARE DOOMED is a space-based twin stick-shooter developed and...