“Characters, story, setting and soundtrack come together to a form a once-in-a-generation type of game”. – Chris

God of War is also my Game of the Year. It is an absolutely incredible experience and a beautiful journey that manages to maintain an epic sense of scale while telling a wonderfully intimate story. There’s not much else I can say that hasn’t been said already except… bring on the sequel!

Congratulations to Sony Santa Monica and Cory Balrog for winning The Loot Gaming Game of the Year 2018!

You can read my God Of War review here.

The Bayonetta double pack on Switch deserves a lot of love. Despite being remasters the games feel totally fresh running at 60 frames per second and they hold a special place in Kyle‘s heart: “Bayonetta 2 is the best action game released because it can withstand time and has aged wonderfully because of its fluid gameplay, freedom for the player to experiment with combat, and because it goes out of its way to empower the player to the point that they are awestruck at the visual feats they are able to perform because they earned it against challenging odds.”

I know Hollow Knight released in 2017 but it only came to consoles in 2018 so this is specifically the Nintendo Switch version. Blame Blue‘s love: “Not just my top game of 2018, but my top game in a very long time (and yes, the console versions were released in 2018, so I’m counting it). It’s the complete package: gameplay, art, story, and music on one, not to mention an enormous value at $15 plus 4 free DLCs!”

“100’s of cars …check
Beautifully realised, historic Britain …check
Masses of content that has something for everyone …
Delightfully fun racing that Playground games have become renowned for…

For me, Forza Horizon 4 is the yardstick that all racers, for years to come, will be judged by. Even if you have never been a fan of the racing genre you can’t help but fall in love with this game.”

Fans flocked back and absolutely adored the most recent Destiny 2 expansion; Forsaken. It made a huge impact on the community.

“2D platforming perfection. Challenging with one of the best soundtracks of the year makes this a must-have for any switch owner.” – Chris

Another Nintendo title that is beloved by Kyle, as you can appreciate in his review.

“An excellent platformer that knows how to teach the player without boring and dull tutorials, that shows the importance of fighting for your goals and to learn how to live with yourself”.– Ray

Celeste is a truly special game and deserves way more credit than we can possibly give it.

Indie Publisher of the Year – Team17

Team17 released their 100th game this year! That century includes genuine classics like Overcooked, fantastic platformers like Yooka-Laylee and many, many more brilliant titles such as Planet Alpha! Let’s hope we get 100 more!

Feel free to check all our Team17 coverage here! 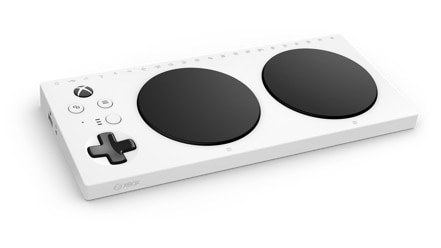 I’ve used this. I can safely say it’s an absolutely fantastic device. It’s genuinely one of the greatest gaming innovations of all time, never mind this year. Microsoft is doing something truly special by making gaming as accessible as possible to anyone who could possibly want to be involved.

I played this at Gamescom. It’s fantastic. Genuinely amazing. I am counting down the days until Game of the Year 2019 launches.

Celeste is back. This game tells such a beautiful story which connects at such a personal level that it would be impossible to leave it out.

V-Rally made its comeback in 2018 and jumped straight to the top of Dave‘s list: “Without a doubt, my top game of the year. It blew me away when I reviewed it… the graphics and gameplay come together to bring this long lost Legend home for good.”

Here at The Loot Gaming, we love fighting games. Just give this 7k words review a read if you’re in any doubt of why Smash deserves this title.

Blue tells us, “It was love at first sight for me. I didn’t even need to finish the free 3-hour demo before I knew that I needed this game in my life. It’s everything I love about old school RPGs in a beautiful retro-inspired package.”

Octopath is a beautiful game and deserves recognition for its bold art design.

Way of the Passive Fist gets a shout from Ray because, as we all know, Ray loves an indie. “Simple premise, awesome execution. This title is what happens when a studio puts a lot of effort on fixing a title only to end up with something quite great. A game that may be short but that will give you hours upon hours of fun gameplay and amazing battles. Long live Weak em’ ups!!!”

And that’s it for TLG 2018 Game Awards, make sure to keep it here at The Loot Gaming for all your video game related news, previews and reviews!

Four months after release, Game of the Year God of War is getting a New Game+ mode
August 9, 2018

Digital Leisure has announced that Dragon’s Lair Trilogy, a collection...

Prepare yourselves everyone, because we now have another Final Fantasy...

Back in November, SNK released a collection of games to...